Two modest older three dimensional gentlemen, both a bit chubby, stand together in conversation on a narrow platform.  They appear amused:  one is clearly pleased & smiling, perhaps having just shared a joke or told a humorous story.  The other listens, a bit bemused, but enjoying the moment.
The figures are realistic, but rustic & rough, with faded metallic surfaces.
They stand in front of a two dimensional galaxy of shooting stars, or perhaps it is a greenboard extensively marked up with complex curves & intersecting lines. The platform could be a station for some unspecified transportation system, or it could be a strip of beach.  It is dotted with odd dark elongate half dome “boulders” that on close inspection appear to be weather worn:  multi-colored, with shallow fissures, and lumps. The surface of the platform has a hard to see design: it takes a very close look to find the two figures stand on a row of dark strange faces…

This photo of a mixed media sculpture, taken in late afternoon light that is almost orange in tone, casting long deep shadows. The light from the left illuminates and shines through scratched & broken sections of acrylic onto three concrete figures standing in a conversational group among an unusual assortment of objects. Is this odd scene a sculpture park?  Who are these people & why are they here?
The lighting is dramatic. While the left side of the photo is so bright as to be nearly white, the far right is the dark side:  sharp black shadows of the figures are thrown up against a dark background lit up to a deep orange and patterned with a spider’s web of shadow created by the “wall” of cracked scratched acrylic.

Item 3, tertiary, mixed media based on a lino cut print:

Two rather mysterious softly outlined figures, a man and a woman, stand together amid a whirl of leaves and rippled lines:  the air currents are as visible as the figures or the leaves which fly loose from the tree at left.  The figures are transparent, gentle, & ghostlike;  they stand barefoot on or in an area of soft brightness that is more cloud than ground. The colors are soft, the tones are dark greenish black, soft yellow to a peachy or coppery color.  The print shows the texture of the thick paper.

My selection of work for Flotsam & Jetsam was not based on extended consideration:  there was not very much time to choose once we decided to change our work for a March show.

And I was so pleased with my new metallic look resin figures that I wanted to show them off.

I liked the idea of sharing my newest figures with others.  And I liked the challenge of getting my new piece properly mounted & complete for the show (although the timing for completing the presentation along with my commitment to cook a RW Monday dinner was terrible!!!).

The other two pieces were selected to be compatible with my newest Conversation (number VI). 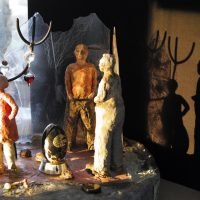 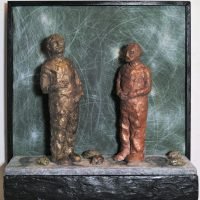 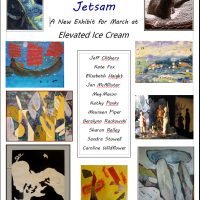 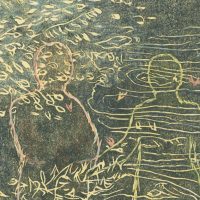 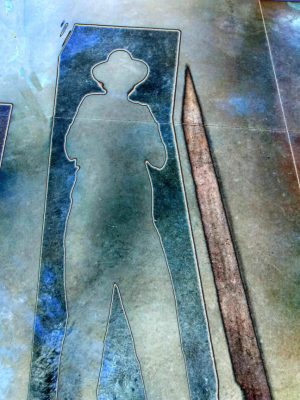 I sell directly, and from Saatchi online. Prints are available at Saatchi, and the other sales links listed below. Please do not hesitate to contact me with questions or to ask about a purchase. 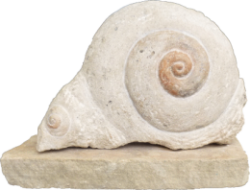